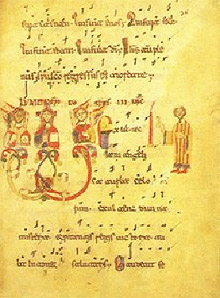 “The first Croatian neum manuscripts for church music date from the 11th century. The Osor Evangelistary (1080-1082) from the convent of st. Nikola in Osor (island of Cres) is written in beneventana, ornamented by Monte Cassino initials, and accompanied with old neums. This evangelistary contains among others a prayer for the Pope, for Byzantine tsar, and for the King which at that time was factual ruler of Osor (regis nostri) – Croatian King Zvonimir. The evangelistry is held in the Vatican Archives. Some of the Christmas folk songs from the 12th century are still very popular. It is interesting that the Croats have more than 500 (five hundred) Christmas carols. There are Christmas verses that can have a dozen of different melodies, varying considerably from region to region. The number of Croatian Christmas carols is surprisingly large even in world’s proportions.

A special place in the history of Croatian music has the Glagolitic church singing. The earliest mention of glagolitic singing in Croatia is already from the year 1177, when Pope Alexandre III visited the town of Zadar, known for its very old and fruitful glagolitic tradition in Croatia . In the 1368 Missal of Duke Novak (held in the National Library in Vienna) there are symbols above the Glagolitic text which seem to denote the way of singing. The same holds for the Hrvoje Missal, written in ~1404 by scribe Butko probably in Zadar, kept in the Library of Turkish sultans in Constantinople in Turkey.

Glagolitic singing has three basic components – Gregorian coral, Croatian folklore and Byzantine church music. This type of church singing is still preserved on some Croatian islands. It represents a unique phenomenon in the history of European music.

The oldest known music preserved in Croatian language is considered to be Kantual “Blagoslovimo Gospodina” (Let us Bless Lord), written in Latin Script, dating from the end of 14th till the beginning of 16th centuries.

It is kept in the Dominican Convent in Starigrad on the island of Hvar.”

Misa u Harvatski Jezik (= Mass in Croatian Language) ,
kept in the Franciscan convent in Sinj, 1644 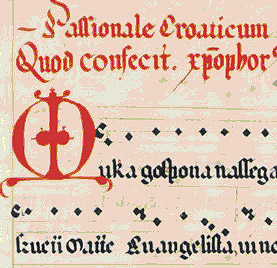 Liturgical singing from the Parcic Glagolitic Missal printed in Rome in 1893. Note that the text is printed in Croatian Glagolitic characters.